Misguided Modules is the name of my project to learn more about electronics, especially in the analogue domain, and in particular applied to music production, while making potentially marketable Eurorack modules. 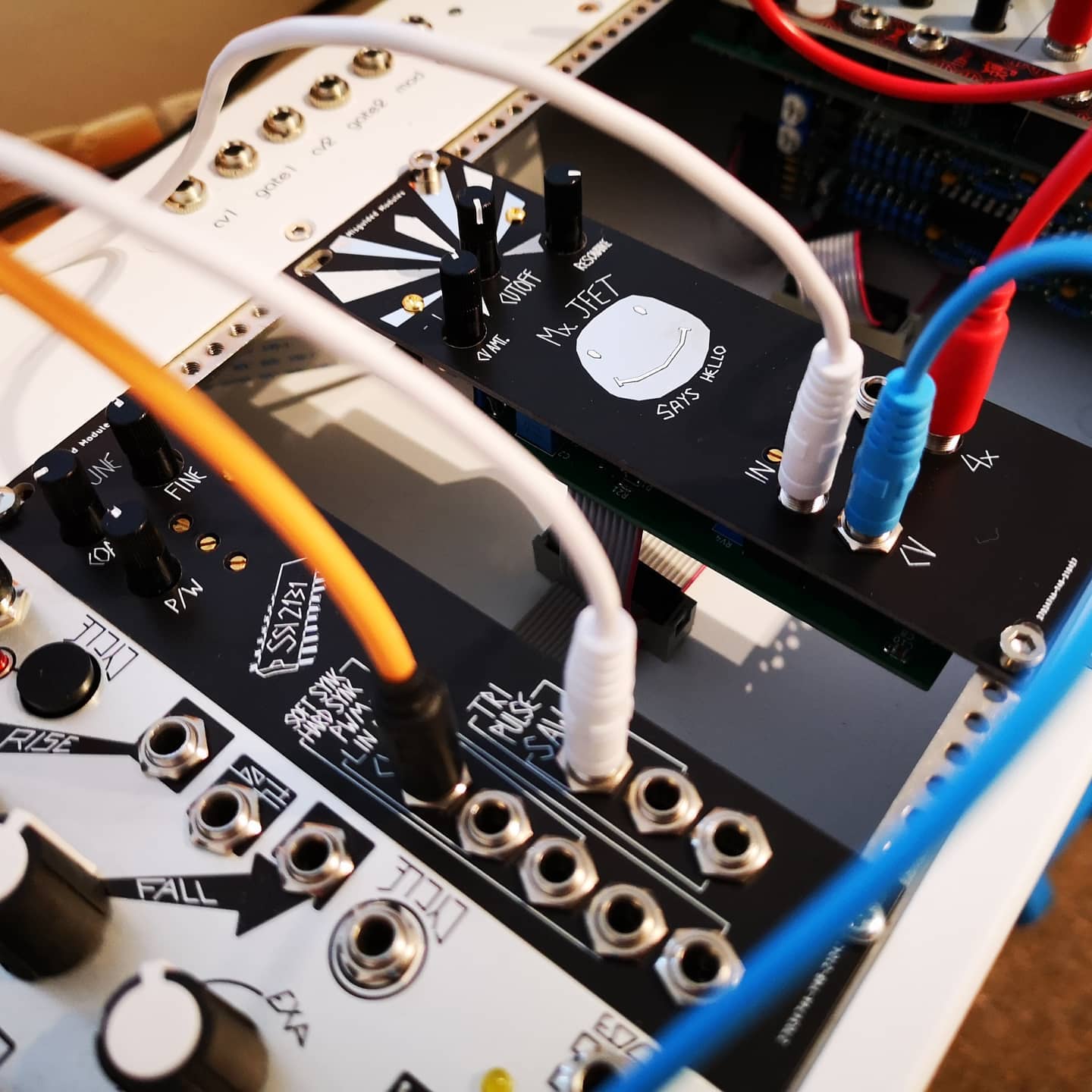 This demo has 2 VCOs going into my Mx JFET low-pass filter prototype, with some reverb and drums added in post:

Note that there isn't a VCA in there - note articulation is fully controlled by the filter. I'm using the 4 pole (24dB/octave) output for the demo.

The module exposes all of the SSI2131 inputs and outputs:

All this in a skiff-friendly 6HP package. The panel and circuit board were manufactured by JLCPCB, while the components can be sourced from UK-based suppliers - I used Farnell for most of the SMD parts and the power connector, Thonk for the knobs, and Amazing Synth for the SSI2131 itself, as at the time I originally put this together it was not yet available from Thonk.

Analogue synthesisers are undergoing a bit of a renaissance, especially in the modular world. They can also be fun DIY projects as parts are now easy to obtain, and there are vendors dedicated to serving the DIY market - from selling kits to individual ICs for music production. And of course, if people are buying musical ICs, there have to be companies making musical ICs. For instance, Behringer's sister company Coolaudio makes a number of chips originally designed by CEM and SSM. These go into their synths, both new designs such as the Neutron or Crave, and the clones that made them infamous among the gearhead community. There's the Latvian ALFA RPAR company which makes a whole lot of ICs and matched transistor packages. And the American Sound Semiconductor, which makes both improved designs of old chips, and completely new ones, such as the SSI213x family.

There are currently two ICs in this family, the SSI2130 and SSI2131. Both share a common triangle core, input stage, exponential converter, and other support circuits. The SSI2130 then exposes a number of different types of outputs, as well as a pin allowing for through-zero FM - this in itself is pretty cool as it lets you use the 2130 as an analogue operator in a Yamaha-esque FM synthesis engine. The downside is that it's not the cheapest part and it comes in a tiny QFN package which could be pretty awkward to solder.

The 2131 has a subset of the features of its older sibling, and also comes in a SO package which makes it easy to solder, even with just a regular iron - all you need is some tweezers. It's also a fair bit cheaper.

Making it work with Eurorack

The chip is well designed and requires few external components: a timing cap, some passives, and potentiometers for trimming and user control. However, it also requires a +5V power rail and a stable +2.5V reference, and the output signals need to have DC offset removed and then be amplified to Eurorackish levels (typically 5Vpp).

In this design I went for a fairly naive setup of using large capacitors to block the DC and some non-inverting opamp stages to boost the signal.

In addition to the reference design, I added a straight Linear FM input (in the datasheet this is only illustrated as a vibrato circuit), and a third trimmer pot for coarse tuning. The idea is that the user would perform their tuning with the control pots set to their centre position, which would then allow them to use these controls in a slightly more intuitive way.

I also decided that I want this module to be relatively small, both in terms of HP width and also depth, to allow it to be used with slimmer cases and skiffs. That, and the desire to reduce the number of circuit boards needed - the front panel is manufactured using the same process - meant making the design use surface mount components for the core logic. Connectors and potentiometers are still through-hole, though.

Right now I have two versions of this module. One uses all the components and values suggested in the reference design, while the other was an early attempt at making this module easy to manufacture by using parts from the JLCPCB SMT library. That design, however, was made before the relatively recent (as of writing) improvements to the service. Since I have half an eye on selling this module as a partially assembled kit in the future, I may do another revision which is optimised for JLC assembly, as a way to reduce my own involvement in placing the SMD parts. Or, since the current version works reasonably well, I may try to use another PCB company's assembly service - I think both SeeedStudio and PCBWay allow you to supply your own BOM. It would be interesting to see if they are able to source the SSI2131 chip themselves, or if I'd need to ship it to them myself; in either case, I'm happy to leave it out of the automated assembly and solder it in as a final step before kitting the board up with the required through-hole components and hardware.

I hope this was somewhat informative or at least interesting, and if I ever get this project to a state that can be sold, I'll update this site with build instructions and a link to buy a kit. I will not be selling fully assembled modules, though.